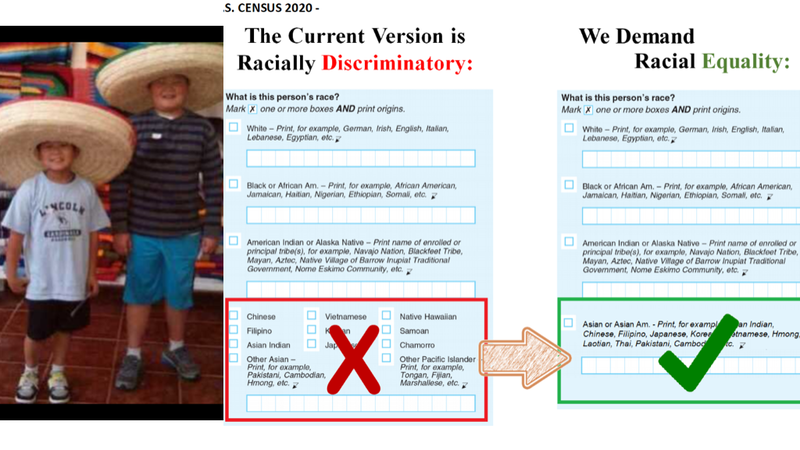 Dear fellow Americans for justice, brothers and sisters against racism,

The glaringly racist legacy of sub-Asian boxes on the Census form was started in 1870, after the Burlingame Treaty of 1868, which eventually led to the infamous, racist, and inhumane Chinese Exclusion Act spanning from 1882 to 1943, which among other terrible abominations, banned U.S. residents of Chinese descent from having children or getting married; their family members in Asia were forbidden from entry to U.S. and reuniting as families. The Census form has no “Asian/Asian American” category. In its place are a group of boxes signifying foreign nationalities in Asia as if Asian Americans were all “perpetual foreigners.” It intrusively identified and collected data on which U.S. residents were of Chinese, Filipino, Indian, Vietnamese, Korean, Japanese…descent. While the Chinese Exclusion Act ended in 1943, did these racist, humiliating, dehumanizing sub-Asian boxes get removed from the Census form? No, they were kept on the Census form by the U.S. government even until today, and if we don’t fight back and boycott the Census form with sub-Asian boxes, it will stay on the 2020 Census form and beyond, prolonging a racist American legacy, a shame to all Americans.

This legacy treats Americans of Asian descent as perpetual foreigners, and collects intrusive personal ancestral origin data used in many kinds of racial discrimination and persecution. In one example, the U.S. government used information from the Census Bureau to identify native born Americans of Japanese descent and sent them to Internment Camps during the World War II. There were also discriminatory laws against Americans of various Asian descent, such as Filipino. Such horrendous trampling of humanity will happen again unless you and I act now to boycott a 2020 Census form with sub-Asian boxes. We demand these sub-Asian boxes be removed and replaced with one description–“Asian/Asian American.” Injustice to one human being is injustice to all human kind. If we don’t stop this racist and anti-immigrant legacy, its “logic” and mentality will be repeated in current and future policy-making. Let’s keep fighting against racism and improve the human condition step by step. Please join the good fight to make this historically significant change happen for now and forever, by signing this petition and sharing it on social media and by email, word of mouth. Power to the people!