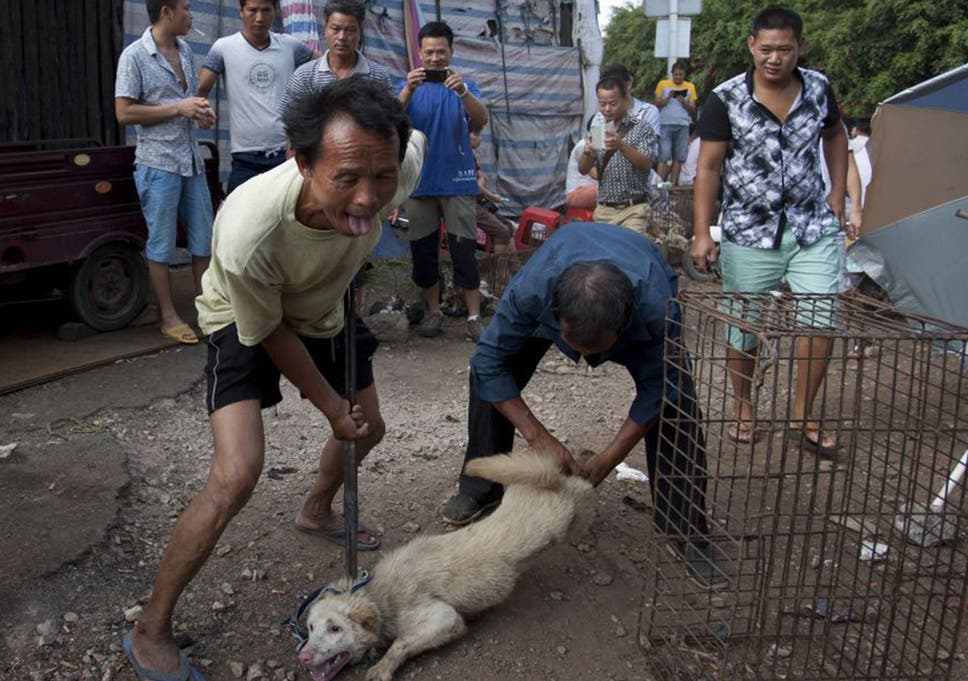 This video was taken by an animal rights activist personally as evidence at the Yulin dog meat and lychee festival in Yulin, China.

This “festival” is an event that starts on June 21st of every year during the summer solstice and it lasts for 10 long horrifying days in which 10,000–15,000 dogs (as well as cats) are tortured and then consumed. However, it is estimated 25 million dogs are stolen, sold, bought, and eaten every year with the illegal dog and cat meat trade. A larger percentage of these dogs consist of pets stolen right from their loving families. The rest of the dogs are captured strays from the streets and some raised in dog farms. After these animals are stolen, bought, or captured they are then transported for days without any food or water, crammed in tiny cages together so tightly that they are unable to even move.

At the Yulin festival, throughout those days, these animals will be hung, burned, skinned, boiled, torched, dismembered, electrocuted and beaten…ALIVE..out in the streets for public view. But If that isn’t bad enough, they intentionally torture these animals in front of the other animals in order to create even more stress and fear. The belief behind the torturing and slaughtering them while still ALIVE, is because the people of Yulin believe the more adrenaline and fear that runs through the blood, the more tender and better tasting the meat will be.

Why do they eat dog meat? Because they believe that if you eat dog meat it gives the men more sexual stamina, it will keep them cool during the summer’s heat and it will ward off evil spirits. China’s tradition of eating dog meat has been around for over 400 years. However, it wasn’t until 2009 when the festival in Yulin began by dog meat traders in order to boost business.

Animal welfare activists have been trying for years to get this horrible event banned. But the government of China keeps looking the other way saying there is nothing they can do.

This treatment is inflicted on a species that provides so many benefits to humans. They are police officers, service dogs, emotional support for abused children, a child’s best friend and childhood memories. They are OUR BEST FRIENDS. They never asked to be born and they certainly do not deserve this type of treatment. Individuals from every country all over the world are against it. There are more and more people worldwide boycotting Chinese manufactured products unless the festival is banned.

This petition is to try to convince the Yulin’s People’s Government and Guangxi’s Autonomous Region’s People ‘s Congress Standing Committee that it would be in their’s and China’s better interest to ban this barbaric festival.

Ban fur farming in the U.S.